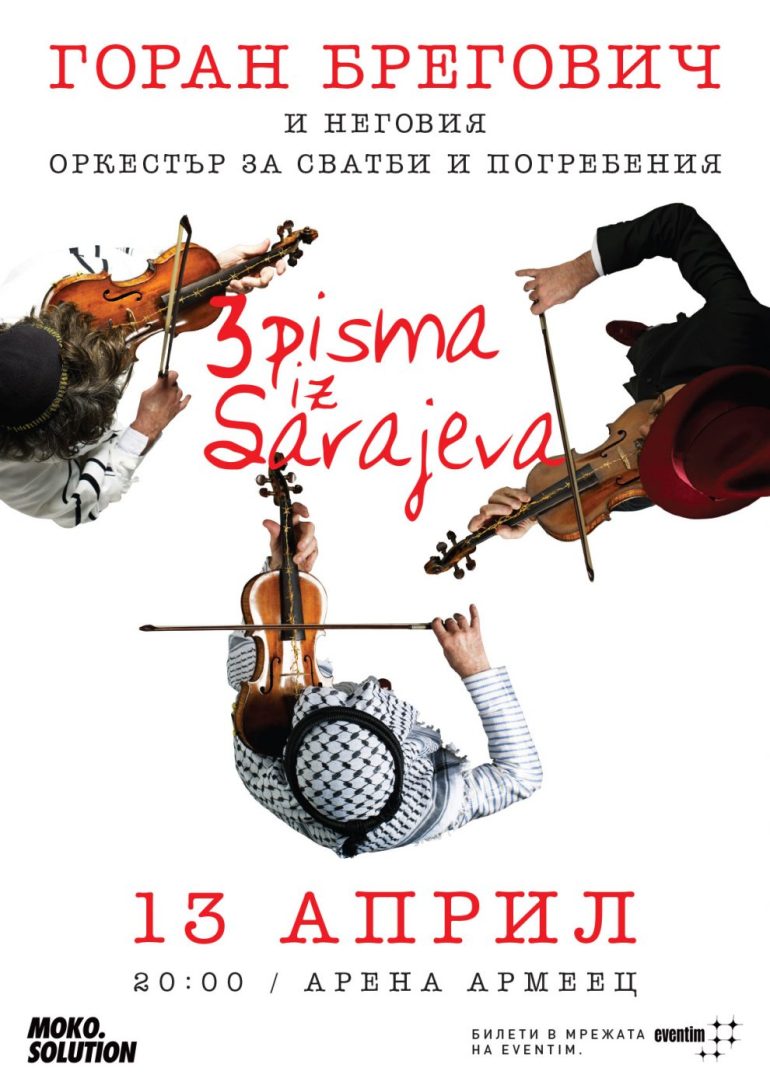 Goran Bregović with a live concert in Sofia

An adult Jew stands in front of the Wall of Weeping, praying. A CNN journalist approached him and asked, “You have been praying here every day for 40 years, what are you asking for?” He says, “Pray for peace between Christians, Jews and Muslims, pray for hate and war to end, pray for letting our children to grow up and become responsible people who love their neighbors.” “And what did the praying bring to you, how do you feel after 40 years of praying?” “I feel like I’m talking to a wall.”

Тhis story inspired Goran Bregovic’s new project “Three Letters from Sarajevo”, which will be presented to the Bulgarian audience on April 13 in Arena Armeec. The project includes numerous and versatile artists with different musical and cultural backgrounds such as Bebe, Riff Cohen, Rachid Taha and Asaf Avidan.

“I wanted to invite and gather musicians from different areas, cultures and communities, and they all gave their hearts to this recording,” Bregovic stressed.

The new project is inspired by three religions and different styles of violin playing in each of them – classic and oriental. Combining Christian, Jewish, and Muslim musical traditions, “Three Letters from Sarajevo” sends the message of peace, understanding the differences, turning them into music that sounds beautiful only united.

The new project is a celebration of cultural differences and unity – this is the message Bregovic sends with his compositions. While his previous project fights against minority discrimination and marks their contribution to international culture, the new “Three Sarajevo Letters” is inspired by his native city, which at the transmission level represents cultural and religious diversity. Sarajevo is both a metaphor for peaceful coexistence between different cultures and religions, but also a symbol of terror and hatred.

“It seems obvious that in his work program God has not instructed us how to live together and that we have to find ourselves in the way,” says Bregovic.

The world-famous musician and composer Goran Bregovic will make a unique gesture for Bulgarian fans. The star will delight the native audience on April 13 (Friday) at Arena Armeec with a special present – Three Letters Live CD , which includes influential live performances of the eponymous show. The disc will be paid out completely free of charge on the day of the event after a ticket is issued when entering the hall.